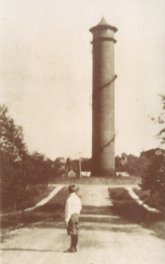 The Town of Chevy Chase is a self-governing municipality located in Montgomery County, Maryland. The incorporated boundaries of the Town extend to East-West Highway on the north, Connecticut Avenue on the east, Bradley Lane on the south and one block east of Wisconsin Avenue on the west. Today, there are 1,032 homes and approximately 3,000 residents in the Town.

In the 1890s, the Chevy Chase Land Company was formed and set the stage for the development of Chevy Chase in the 20th Century. The Company was founded by two gentlemen, Francis G. Newlands and William M. Stewart, who had made their fortunes in the gold and silver mines of the west. After purchasing thousands of acres of land in the area just north of Washington D.C., the Company began a massive development project which included extending Connecticut Avenue north into Maryland, building a $1.5 million electric railway, installing a water and sewer system, and building roads and other infrastructure. Newlands' key early purchase was Chevy Chase, a 305-acre plot of land straddling the line between Maryland and the District of Columbia. The name, which he subsequently adopted for the entire new subdivision, can be traced to the larger tract of land called "Cheivy Chace" that was patented to Colonel Joseph Belt from Lord Baltimore on July 10, 1725. It has historic associations to a 1388 battle between Lord Percy of England and Earl Douglas of Scotland. At issue in this "chevauchee" (a Scottish word describing a border raid) were hunting grounds or a "chace" in the Cheviot Hills of Northumberland and Otterburn.

Real development in the Town did not come until after World War I, as the use of the automobile finally began to make living outside of the District a viable option. It was during this boom that the building lots in Chevy Chase Section IV began to be filled.

Section IV was incorporated as a municipality in 1918. The Enabling Acts of Section IV (later renamed the Town) gave the Town government the legal authority to govern to preserve and protect the general plan of development first envisioned and specified by the Chevy Chase Land Company. The members of the first government levied taxes to provide services to the residents.

The decade of the 1920s saw booming growth in Chevy Chase. As the lots were improved and the population increased, additional infrastructure was needed. The 1930s ushered in a decade of improvements, which included sidewalk and street repair, macadam application to streets, installation of storm sewer catch basins, and implementation of a tree-planting program in the public spaces.

Many of the Town's government and service provision functions have remained the same since this time. The Town is responsible for sidewalk and street repair, retains a tree-planting program, is responsible for trash collection and numerous other services. The Town has, however, grown in the interim by annexing other sections of the Chevy Chase development. After the annexation of Sections 8, 8A and 8B in 1976, the sections were renamed Town of Chevy Chase. In the general election in 1983, the new name was officially approved.

In the 1980s and 1990s, the Town witnessed incredible growth and changes to its neighbor, the Bethesda Urban District. The Council continues to monitor how these changes affect the quality of life in the Town and actively seeks solutions to the problems caused by the growth.

Read "The Town of Chevy Chase: Past and Present," produced by the Town's History Committee in 1990. This file is 38.9 MB, so please be patient.

The Town has completed an oral history project. Details and transcripts can be found here.

The Town has completed an architectural tour of homes titled Celebrating Our History.

A listing of homes in Town deemed historic follows: